﻿﻿﻿﻿
﻿﻿ ﻿﻿ Rummaging through a pile of things accumulated over a while and started to set this rock aside again, but stopped, trying to remember where I picked it up. My first guess is that I might have found it the last time I went out scouting while waiting for a property owner to meet with a film producer and production designer.
I've gotten into the habit of looking for interesting rocks whenever I'm outside waiting for a client. Usually what catches my eye is an unusually pure blue, red or black one, a stone with stripes, uniformly round or clear quartz. Most of those I've accumulated are of long forgotten origins.
I'm not a geologist, so I can't say much about it. The surface is textured such that that it could a piece of coral. I've examined the surface with a loupe and found no patterns anywhere. There is one interuption of its curvature by a small round, raised area, but that offers no clue either.
It doesn't matter what it is or where I got it. For a while it belongs to me. It's unlikely that whomever might one day search through my things will see it and think, "I want this." Most likely, without me, it'll be added back to the Earth, but for now, this finely rounded lump of whatever is one of my little priceless pets. 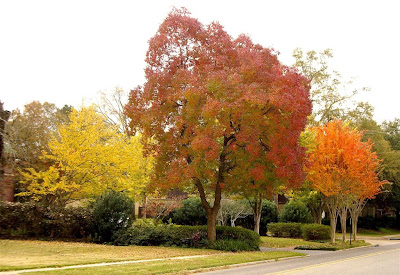 I'd love to find one of these little red trees somewhere by itself so I could add it to my collection. 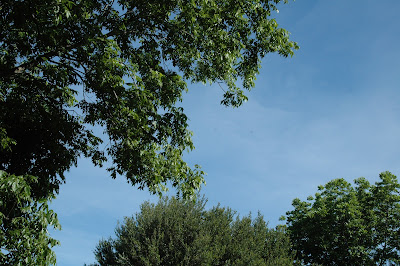 This is just a very mundane image of a few leaves and the sky, but as much as any scenic, a simple view like this can elicit memories of a number of places.

Any person or persons, institution, government agent or agency including, but not limited to, the United States of America using or monitoring this website or any of its associated websites must request permission, in writing, for use of any information or other content contained herein including, but not limited to photographs, comments made about the photographs or any other art posted on this website at any time.
The content of this profile is private, legally privileged, confidential information. Violation of privacy is punishable by law. UCC 1-103 1-308
Copyright © Phillip Messinger 2022, ALL RIGHTS RESERVED.